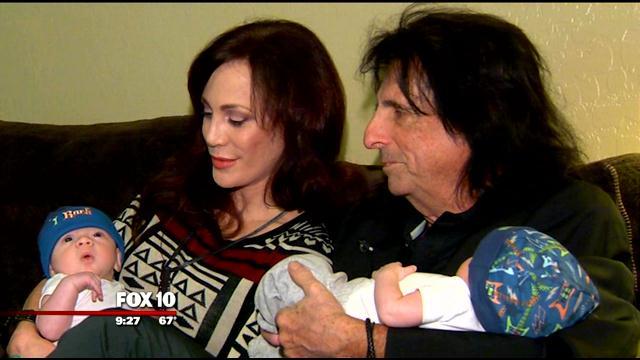 PHOENIX (KSAZ) - We will always remember the shock-rocker Alice Cooper for his creepy makeup, and the straight jacket video, but he has a new image, and it is completely different from the original shock rocker.

FOX 10 got an exclusive look at what it is like to be shock-rocker Grampa Alice Cooper.

"Look at this guy, he's wide awake and looking at you," said Alice Cooper.

Take a good look, that is Alice Cooper, and he is a new grampa. Yes, the shock-rocker, heavy metal wildman.

"This is the thinker right here, this is the one that is going," he said.

He's not the first rock and roll legend to become a grampa.

"The guys in the business are all family guys, almost every guy I know and the rockers, I don't care how weird they are from Johnny Depp to Rob Zombie all have kids, and they totally get it," said Alice Cooper.

Cooper's son Dash and his wife had the twins a couple of months ago, two boys that are perfect for rock and roll.

"Well, this is Riot if that is not a lead singer name I don't know what is, and Falcon he's got to be a guitar player. They'll probably go the other way," he said.

"We just decided that we're going to write down thirty boy names each, we're gonna come back together and decide on one. Falcon was the only name on the list that we both agreed on," said Dash Cooper. As for Riot, "I went to a concert, and I saw the word riot and it just clicked," said Sheryl Cooper.

Alice and his wife Sheryl, his sidekick on stage are doting on the babies every chance they get.

"We call them up and say; why don't you guys go out to dinner tonight, we'll take the kids... you know that's the nice thing about being grandparents is it's like a privilege to watch them," he said.

Grandpa Alice and Grandma Sheryl, not so fast.

"Sheryl said, 'I can't be a grandma because my mom is still alive, and she's grandma?' So what's the Hawaiian name for grandma, I said since we spend a lot of time in Maui? It's Tutu, now unfortunately the mens is Kuku, look it up. So Tutu and Kuku, Kuku Cooper," said Alice.

His antics on the stage can only be described as twisted and bizarre, but that is his stage persona. Just imagine Alice Cooper as your grandpa, let's face it he wrote the coolest rock anthem ever, one that kids can truly relate to. "Schools out for summer, schools out for ever!"

FOX 10 asked Alice what he expects when the world hears he is now a grandfather. "Don't believe that I'm not gonna get ribbed like you know, but then you realize almost every guy that I already know out there is already a grandfather... Mic Jagger is a great-grandfather, so he's way ahead of all of us as he always is," said Alice.

Back in Falcon and Riot's world, the twin's nursery is not skulls and crossbones, guitars and guillotines; it's actually very sweet.

"We wanted to make it kind of adventurous, and piratey, and kind of old world as you can see with the wallpaper," said Dash. "Kind of a classy peter pan," said Sheryl. "We had our friends do calligraphy of Peter Pan quotes," said Dash.

These adorable boys have a lot of excellent adventures ahead of them. For now they're chilling and dreaming of what is in store. Who knows, maybe they'll have their own rock and roll band someday.

So have the Cooper's come up with a band name for them yet? "Well, Falcon Riot, it's pretty good, or Riot Falcon," said Alice.

"They're gonna be exposed to that also, and if they pick it up, they pick it up. They might be two oboe players, but if they are I'm going to say, ok what happens if fire comes out of the oboe wouldn't that be cool," he said.

By the way, Happy Birthday to grampa or Kuku, or Alice Cooper. The rocker is 67-years-old Wednesday, and those twin boys are quite the birthday present. Grampa Alice is heading out on tour starting Thursday, he's got 200 cities on the schedule this year, and yes the babies have seen grampa and grandma in their scary stage costume makeup, and it didn't even phase the little guys.